Centennial, CO, October 9, 2018. Johnson Storage & Moving announced today that it recently participated in rescuing a household goods shipment that was stolen and then impounded in a warehouse in West Chester, OH. Johnson’s was contacted in July by a former customer, who sadly reported that he had been scammed by a Russian-owned “rogue mover” called Flagship Van Lines. This customer, along with hundreds of other victims, booked moves with Flagship, which held themselves out as bona fide asset-based movers with their own trucks. On move day, a non-English speaking crew appeared in a Penske straight truck proclaiming to be representatives of Flagship Van Lines. Despite reservations, the customer entrusted his household goods to “Flagship” and paid them $6,500.00 to move his household goods from Connecticut to San Diego.

Weeks and many unreturned calls later, the customer realized that his goods had been stolen after seeing a news story about a Baltimore based rogue moving company. The FBI and DOT returned 12 indictments in the moving scam. Thankfully, the customer was contacted by the FBI who notified them that they had located their belongings in an unidentified warehouse in West Chester, OH. Johnson’s jumped in and sent a truck and top notch owner-operator, at cost, to retrieve the shipment in Ohio and deliver it to its intended destination in San Diego.

“We are grateful to Johnson’s for helping us out of a very costly and stressful situation – they were Johnny on the spot and we sure appreciate their work” said the scam’s victim (who asked to remain unidentified). “Your driver and the crew were A++ 5-Stars!”

“We were happy to jump in to try to help out in this difficult situation, which has unfortunately become all too common in our industry” said Johnson’s President, Don Hindman. We have seen several of these incidents this Summer, including one in here in Denver where people’s belongings were ransacked in a warehouse. These types of incidents just point out the need for customers to be careful and avoid internet move brokers like Flagship.” 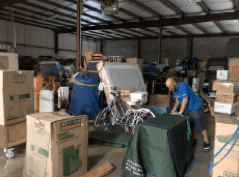